A Los Angeles County Fire Department captain was killed Wednesday in a crash involving a Jeep Wrangler and Caltrans work truck that closed part of the 14 Freeway north of Los Angeles.

Michael Shepard was off duty at the time of the crash that took his life, and the fire captain was pronounced dead that the scene. Shepard was assigned to Fire Station 132, which is located in Santa Clarita, according to the LA County Fire Department.

The crash was reported at about 11 a.m. near the Sand Canyon Road exit. The county employee behind the wheel of the Jeep was killed instantly. The other driver was hospitalized in fair condition.

The county employee was not identified until next of kin could be notified. It wasn’t clear if he was a sworn firefighter. He was off-duty at the time of the crash. 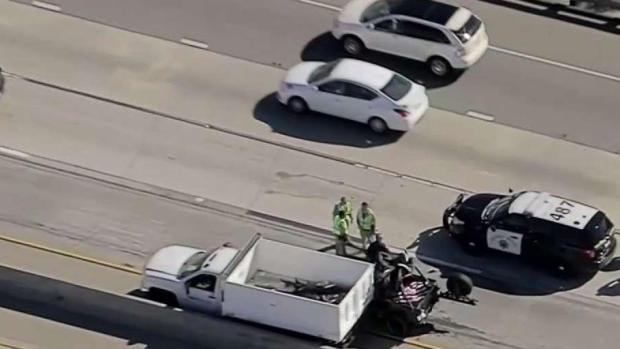 Video from NewsChopper4 showed a Jeep Wrangler appeared to have crashed into the back of the Caltrans truck. Video showed a U.S. flag in the bed of the Jeep.

CHP officers said they used the flag to cover his body, as a sign of respect.

A CalTrans crew was operating a slow cleaning detail, traveling at 3 to 5 mph at the time of the crash. A CHP officer was also escorting the CalTrans crew, and lights were flashing.

Northbound 14 Freeway lanes are expected to remain closed until the investigation could be completed.

Gordon Tokumatsu contributed to this report.

How do I get my music video on MTV?

This Week: Oscar Is in the Air