At the end of a January police pursuit in the San Fernando Valley, police took a driver into custody, just as another wild chase quickly ensued.

The driver’s pet dog — a long-haired Chihuahua named Ladybug — jumped out of the Nissan and ran through oncoming traffic before finally taking refuge under a parked car. Witnesses ran after Ladybug, sprinting after her as the frightened dog scampered under other cars.

The resident who finally caught her was bitten in the process.

“I help all the dogs — anybody, everybody,” Khoren Moughalian told NBC4 as he wiped blood away from his hand. 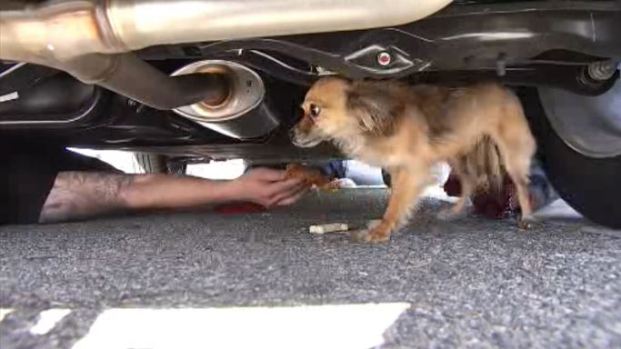 The unusual chain of events, one for which police and animal services have an established protocol, left some viewers asking about what happened next.

“We are so worried about the dog,” tweeted one NBC4 viewer.

“The cops wouldn’t do anything for that dog!” tweeted another.

Moughalian turned Ladybug over to the LAPD, who in turn, delivered the dog to LA Animal Services. With no access to the tiny hand-biter’s rabies vaccination information, LA Animal Services is holding the dog in a restricted area.

“It is incredible that some people had thought, ‘What are police going to do with the dog?'” LAPD Captain Dog Graham said. “We are going to turn it over to the Department of Animal Services so that the dog can be reunited with its owner after the criminal justice process has completed.”

Contrary to many messages posted on social media, Ladybug is not currently up for adoption.

“When an animal comes in when their owner is incarcerated, we take them in and do protective custody for 30 days,” said Brenda Barnette, general manager of LA Animal Services.

This gives the dog’s owner the opportunity to make arrangements to get the dog. If no one has come for the dog after 30 days, the dog will be put up for adoption.

“What if that dog is going to be the key to that person’s recovery,” said Graham. “How good is restorative justice if we chop away at the emotional foundations that could make somebody whole again at the other end of the criminal justice process?”

Incidents of pets being involved in police pursuits have gained increased visibility on social media.

At the time this article was published, Ladybug’s owner had not made arrangements to get her back. Those interested in adopting her can find out more information on the LA Animal Services website when the 30-day period is over.

Twin Geysers Drench a Hillside Above PCH in Santa Monica

Caught on Camera: Attacker Tackles Woman From Behind Outside Restaurant

No Arrest After Detective Attacked on Skid Row